In the situation of recent political, social and economic crisis of Iran, seven independent female documentary filmmakers talk about their personal and professional lives, concerns and challenges in a seven part autobiographic film.

Shirin Barghnavard (1976) is scriptwriter, filmmaker and editor. She has a Bachelor in Film Directing from Sooreh University of Tehran.
Firouzeh Khosrovani settled in Italy to pursue her artistic studies at the Accademia di Belle Arti in Brera.
Farahnaz Sharifi is a graduate in filmmaking from Soureh Art University,Tehran.
Mina Keshavarz (1984) has a B.Sc. in Industrial Engineering.
Sepideh Abtahi (1975) has a BA in Drama from Tehran Azad University.
Sahar Salahshoor (1982) studied civil engineering.
Nahid Rezaei (1963). In 1985, she was expelled from the University of Seda and Sima after refusing to obey the religious restrictions. 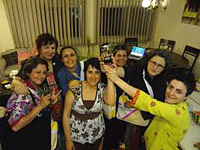