From Anguish to Hope

We have thus reached the third edition of what has become an anticipated biennale meeting and we would so much like to boast a real change towards peace in the Israel-Palestine situation. Alas, it seems we are further away than ever from it and the abscess that poisons all civilian and political life in the Middle East has only spread, igniting new centres of death and destruction.

Throw in the towel then? Nothing could be further from our thoughts. On the contrary, more than ever we are convinced that cinema can convey knowledge and the recognition of "Other". Through images our thoughts and our feelings are heightened; the eye feeds both the spirit and heart.

We have also recognised the need to widen our approach, for the whole area is implicated in this tragic and endless conflict. Foreign occupation in the form of military violence is a terrible threat to the moral integrity of its victims. The brutality of the American presence in Iraq has only exacerbated the conflicts opposing its religious communities, plunging the country into a true civil war.

Furthermore, what has happened in Gaza, for which the departure of the Israeli settlers, far from bringing the expected liberation, has incited its transformation into the world's largest open air prison, under the permanent fire of Israel, is reaping its daily number of innocent civilians: a million and a half people hermetically shut in, victims of the worst deprivations, have also finally ended up fighting one against the other. And how could it be otherwise?

And then, there is the "thirty-three day war" during which Israel devastated Lebanon, causing more than 1,200 casualties, collapsing that country's precarious reconstruction after two decades of civil war. Notwithstanding the Israeli casualties, even though they may be fewer, it is not a reason to overlook them.

There we stand in a decidedly gloomy assessment. We may hear talk that a majority of Israelis hope for peace, which I don't doubt, however are they ready to pay the price of bringing it to fruition. Alas, we should never forget that the existence of a wall raises the question: On which side is the prison? For in their admittedly "golden prison", Israelis live in fear of the future and an overall growing moral erosion; whereas, in spite of their often terrible present, Palestinians survive on the hope they place in their younger generations.

So let's not give way to discouragement! It was normal and inevitable that this third edition should broaden its outlook to the cinema of neighbouring Arab countries such as Lebanon, Syria and Iraq, all involved in the conflict.

We shall feature many new Palestinian and Israeli film directors. Leaving aside for the time being the already well-known names in filmmaking, whose production we keep an eye on, this year's programme offers a large opening to some brilliant young talent. Political tension and serious economic problems - far from discouraging them - seem to kindle their creativity.

Another new element for this edition is debates and discussions based on crucial themes, coupled with a resonating film screening every evening: the Israeli settlement of Palestinian land, strongly presented in our opening film, The Iron Wall, by the Palestinian Mohammed Alatar; the tragedy of Gaza; that of Lebanon; and also the festering chaos in Iraq. On another note, there is also a debate focusing on the place of Women in the social and political context of the Middle East, their indispensable fight for emancipation that both Islamic and Orthodox Jewish society keep denying them. This event will also be a witness to their coming together, the pioneering part they take in dismantling walls, and THE wall.

Cinema can certainly help to tumble down walls, be they made of concrete and steel or of prejudice and ignorance. And so can music and our encounter shall end symbolically with the magnificent document, Knowledge is the Beginning by Paul Smaczny featuring the West-Eastern Divan Orchestra. This ensemble of international reputation is composed of young Arab and Israeli musicians, a project founded by Edward Said, whose memory remains so vivid for us all, and Daniel Barenboim, the great artist and humanist acclaimed all over the world notwithstanding – despite great difficulties -  Ramallah, in the heart of Palestine.

And the fact that the orchestra has found a permanent residence in Seville, the capital of Andalusia (the legendary Al-Andalus), where a thousand years ago the most refined civilisation of its time saw the harmonious coexistence of Christian, Muslim and Jewish cultures, this alone is more than just a symbol. It is an example that should inspire us all, and the evocation of which will mark the manifestation's closing note, not on a resigned "What's the use?" but in a confident "in spite of all!" 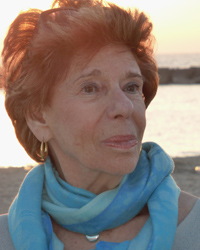