Water is part of a series of documentary and fiction produced in the Water Project, initiated by the Film Department of the University of Tel Aviv. The films were made by Israeli and Palestinian filmmakers, who worked together on the project.

Drops by Pini Tavger, 12'
A soldier runs into the bathroom on his military base, catching his breath after escaping from his division. While washing up, he starts creating a symphony of water drops in memory of his childhood.

Women of Refaiya by Yoav Shavit, 13'
Due to the non-existent water infrastructure in the Palestinian village of Refaiya, women must carry water in buckets from the nearby spring. The film focuses on the women of the El-Amur family in their daily effort to sustain their family's water supply.

Make Yourself at Home by Heli Hardy, 13'
Rauda, 19-year-old daughter of Dahamas, must replace her mother on a cleaning job in a rich Israeli home. The two young Israeli's at home are sunbathing around the pool and invite Rauda for a swim…

"In times of frozen dialogue between Israelis and Palestinians, a laboratory was created: Palestinians came to joint meetings in Tel Aviv, Israelis went to joint productions in the West Bank. Quietly but surely, they met each other and built relations - underneath the everyday surface. Within the difficult reality that we live in, I should not allude that art can bring political changes. However, I know that we created a group full of energy and life. And where there is life – there is hope." Yael Perlov 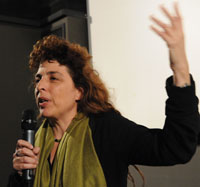