Water is part of a series of documentary and fiction short films produced in the Water Project, initiated by the Film Department of the University of Tel Aviv. The films were made by Israeli and Palestinian filmmakers, who worked together on the project.

Still Water by Nir Sa'ar & Maya Sarfaty, 14'
By an ancient spring near Jerusalem, an Israeli couple finds a quiet moment away, but must share the cool spring water with a group of Palestinians heading to their jobs in Israel.

The Water Seller by Mohammad Fuad, 18'
All summer long, water seller Abu Firas is working in Bethlehem around the clock. The city is suffering from a shortage of running water and the inhabitants are obliged to buy water at inflated prices.

Raz & Radja by Yona Rozenkier, 17'
Raz, a tired reserve soldier, guards a broken-down army truck and Radja, a Palestinian who broke curfew. The two repeatedly attempt to jumpstart the truck, while a friendly donkey refuses to leave them alone.

Eye Drops by Mohamed Bakri, 24'
Mohammad Bakri and his two sons, Saleh and Ziad, live in a small flat in Tel Aviv. Their neighbor Sarah, a Holocaust survivor, asks them to assist her with her eye-drop medication. A unique and mysterious connection grows among them.

Kareem's Pool by Ahmad Bargouthi, 15'
70-year-old Kareem returns to Palestine after 30 years in Chicago. Upon his return, he builds a swimming pool thanks to a spring flowing on his land. Palestinian families come enjoy the peacefulness of the place, to relax… until groups of settlers burst onto the scene.

"In times of frozen dialogue between Israelis and Palestinians, a laboratory was created: Palestinians came to joint meetings in Tel Aviv, Israelis went to joint productions in the West Bank. Quietly but surely, they met each other and built relations - underneath the everyday surface. Within the difficult reality that we live in, I should not allude that art can bring political changes. However, I know that we created a group full of energy and life. And where there is life – there is hope." Yael Perlov 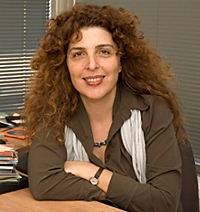