Item posted on: 20/01/2012
Final Note: The Year of Hope
A two week event, a debate every night with prominent speakers, more than 60 films on the program, twenty filmmakers present, an eager and curious audience, at our usual venue in Paris: The fortnight was a success.

The year 2011 will go down in history as a very special year. The Arab Spring swooped over the entire region, toppling dictators in Tunisia, Egypt and Libya, bringing  youth into the streets as they stood up to the domination and humiliation by those in command, from Yemen to Syria.

In addition to our focus on the different countries of the Middle East including Lebanon, Iraq, Iran… it seemed necessary to bring before our audiences one of the "youngest" personalities inspiring these young people in the streets, 94 year old Stéphane Hessel. His presence was captivating and as he drove away from Les 3 Luxembourg, the crowd in the street gave a final ovation.

As always the Israeli-Palestinian conflict is at the heart of our fortnight. 2011  brought joy and pride to the Palestinian people: on December 13th, the last day of our festival, UNESCO raised the Palestinian flag at its headquarters. Palestine had finally acquired recognition as a country in an international organisation. A beautiful omen that we celebrated with champagne as we closed the doors on the 5th edition.

With increased audiences and more filmmakers present, with high quality debates, our task for the 6th edition is laid before us. See you in 2013. 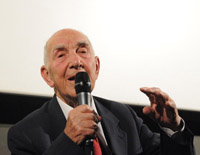